That incident happened at Pondok Bambu detention center. One night, I awoke from my sleep because of the scary sniff of the devil in my ear. I shuddered, but I wanted to know exactly what was happening to me. Thus, I kept closing my eyes so I would able to listen to it more carefully.

I couldn’t understand what did it say, but I could feel its snorting-sound-blow entering my ears. Aah…! Hopefully I never ever feel such that again.  After I knew that it was for sure the devil’s voice, I woke up. And I knew that I was being tested again by God to face the devil. Indeed, God’s teaching is always real as that and undisguised.

Luckily, I didn’t sleep alone in the prison. I saw my roommates were still watching TV, and I saw the time was 1.00 a.m. I couldn’t help to think, how was it possible that I could hear the devil’s voice? But then I realized  that God has put half of me in the unseen world.  So I have to be brave to face that fact. That’s hell’s territory. Thus, I have to face that fact. I am truly in hell at that moment!

At other times, I also heard devil’s music and singing that was completely in discordant tone and uncomfortable to hear. The tone was strange like the sound of satanic ritual music. I listened to that sound while I was half asleep until I was awake. When I woke up the satanic sound was still there, but I did not open my eyes in order not to lose the moment. I tried to find out from which direction the sound was, and then I opened my eyes. As soon as I opened my eyes, the sound was no longer there. It was gone instantly at the moment I was awake. The sound was so clear, and it made me asked my friends in the room who were not sleeping yet.

Then I imitated the sound, and they said:” no we hadn’t heard such sound, we only watched TV”.

Well, I had gone through the horror atmosphere of the prison for several times.  And Jibril told me: ”You have to know the figure of devil. And you could learn it only in this prison. Wherever there are abundant of sins, therein the devils stay, and their kind are the very professional one. Thus, they are powerful devils who are undisguised “.

People said that my room was again a haunted room. There are plenty horror stories about that room. But what I want to say is that in the prison there are many spooky rooms. As it is the devil’s habitation. Prison is the headquarter of the devils. The sinners certainly synergize with the devils. 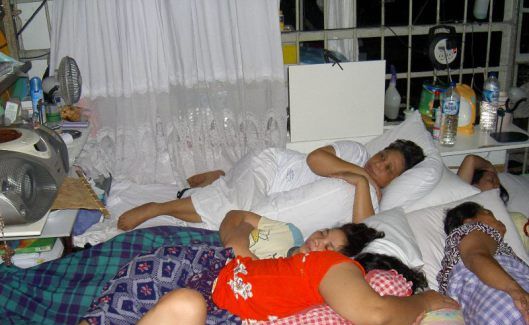 This is my room in Pondok Bambu Detention Center, one room occupied by 25 people