Knowing God through the distribution of His Spirit unto His entire creations, in fact it is not a new subject. All people know that spirit is given by God, and that God’s Spirit is globalized and there is an established of the distribution system of the flow of His Spirit from the embracement of spirit in His Most Global. Maybe that is the new perspective. 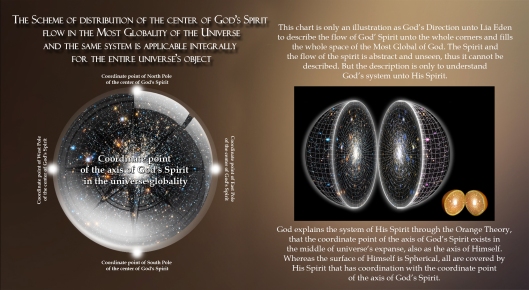 As spokes on a round section, such is the connection of the track of spirit based on the basis of spirit on the entire surface of The Most Globality of God to the center point of coordinates of spirit basis, located in the middle of the Most Globality of God. The figure of the section of spirit stream informed by God unto us, actually it can’t be made transparent for those all are mythical sections, unseen. However God has informed the system of His Spirit. If not because of He Who explains, certainly none of His creature will have the knowledge.

Thus, the section of the track of the flow of God’s spirit Who gives life upon all of His creations in the whole universes and all the existing lives inside them. Actually, the entire existences within the embracement of The Most Globality of God, the distribution of spirit is mainly from God, which begins the living and the life. Within God’s self there is no vacuum space from spirit, for all the matters that seen and unseen certainly have spirit. Supposedly the gravel and sands could talk, thus we know that those objects also have spirit.

The visible spectrum is part of electromagnetic spectrum, which could be seen by human’s eyes. Electromagnetic Radiation in this range of wavelength is called as visible light or just simply a light. In the universe, sequence of color spectrum continuously provided if the light is dispersed into its components.

In physics the whole electromagnetic spectrums starts from gamma rays (the highest frequency) up to radio waves (the lowest frequency) is the propagation energy.

Lightning spectrum is resulted from the collision of negative and positive charged ion which release a huge energy.

And in chemical spectrum, the compounds of negatively charged electron and positively charged proton cause the changing character.

Molecule spectrum shows the transition among the different level of energy of electromagnetic, rotation and molecule vibration.

Spinning spectrum on the level of micro wave is produced by the changing of the condition of electron spin inside the molecule which have different pole.

As for all chemical reactions, those will create energy level changing, whether it is exothermic or endothermic. That is stated as the reaction of spirit which compounds  the elements.

Thus, the consideration of all existences within the embracement of the Most Globality of God is given a spirit by God, and that spirit is God’s Spirit. But God’s further explanation about the coordinate points of His Spirit and the flow chart of His Spirit distribution unto the entire universal objects and His creatures and unto all elements of universe is a new knowledge that God descends down, so human being would realize that all lives absolutely depends solely on God.

All the living creatures and the dynamics and mechanism of the life of universal objects and all the existence inside it are embraced in the divinatory of God. Herein we would like to bring forth the perfect Divinatory of God, related to the Divinatory of God who descends down unto human the molecular biology, which include the knowledge about DNA that the coverage is very wide. As for, in the coverage of science there is the role of nucleus that is like a brain in human’s cell.

Nucleus is the control center which is found in all human’s cells at some points during the entire life span. A nucleus is responsible for determining and controlling what is seen, such as a cell and what it should do.

From this point we bounce to the other point, that is astrophysics to know God. When humans reach the outer-space technology for they wish to wander the universe, not excluded the astrophysics scientists actually could find God through their science, as now human has found Hubble telescope that succeeds in identifying universal objects, and Hermes spectrograph that has advance technology, which is expected could help the astronomers to reveal the origin of Milky Way galaxy. Ironically then, human beings seem to need not God due to their possession of sophisticated technology.

The Most Omnipotence and The Oneness of God can be elucidated not into technology that has orientation only on the calculated empirical facts which are counted and could be categorized and formulated. Thus, scientists tend to prefer their logical awareness rather than the spiritual instinct. However, God now brings forth His Words in line with the logic of the universe for the sake of establishing a new science from God. That matter is aimed to bring the scientists to their senses to glorify God.

Science becomes very valuable to know the Secret of God, thus truly, know your God through the deepening matters that covers small things of life up to the greatest in the universe. Don’t act contrarily, succumb in your amazement toward the sophistication of technology so you refute God’s role.

Knowing God through molecular biology and astrophysics could divulge the existence of God wholly, when human beings would like to know where is God and how is God’s Shape. And when the science of molecular biology and DNA (microcosms) are aimed to penetrate astrophysics (macrocosm), thus observation of science will reach unto knowledge about God The Supreme Spirit and the spherical shape of God, and The Most Global. From that embracement all science could be penetrated and will become the perfect science and could be called as “ The Theory of Everything ”.