Writing is not my profession. Before I met Jibril I didn’t know how to compose a poem or writing an article, let alone Revelation. Arswendo Atmowiloto knew very well that I couldn’t write. Just ask him!

In the past, I was asked by the University of Indonesia to make a paper about women prisoners. Because I was confused on how to make it, I came to Arswendo who was imprisoned at Cipinang Penitentiary at that time. I asked him to make me a paper and a poem about women prisoners. But, he asked me to hand out questioners to several women penitentiaries in Indonesia so he could have a picture about them. That was easy for me, since at that time I knew well Baharuddin Lopa (Directorate General of Penitentiaries at that time). I just called him and he agreed, and facilitated me to distribute the questioners for the prisoners at Women’s Penitentiaries, such as in Tangerang, Malang and Medan, so I could fulfill my promise to Arswendo.

And I also asked him to make a poem to be read by me at that symposium. I still remember the title of the poem he made me, that was “Surat Maryam Untuk Anak-anaknya” (Maryam’s Letter for Her Children). The content was about a woman inmate named Maryam who was long for her children. That title looked so coincidental to be rendered as a relation to my destiny now, for I am stated by God as the reincarnation of Maryam and I also once experienced imprisonment. It seems that Arswendo’s poem has reflected my destiny. God could send his message through anything, including Arswendo’s poem that he composed in 1992.

At that time I succeeded in presenting my paper at the symposium. However, it was not my creation, but Arswendo’s. Herein I confess to the public, so I don’t keep this guilty feeling upon this matter. It wasn’t my right, whilst I have presented it to the public, as if I was the one who wrote it. Therefore, I use this opportunity to make a confession to the public regarding that matter so my errand unto God would be settled now.

Thus, ever since I know Jibril, I could write Revelation that should be written by someone who understand and master religions and holy books. Feeling of confusion, I looked at those all thick Holy Books and the content was very dense. It’s understandable that I was lay on that matter. In my heart I was asking, what I could do to carry out God’s Mandate, which was very heavy without any knowledge.  And could I learn to master everything that I should master fast, so I could fulfill my promise to God?

But God helps me to learn the essence of religions more easily. When God is explaining an issue that I should write and He wants to refer me to His previous Revelations, thus I am blessed with easiness from Him. It is enough that I pray to Him and open the holy book, and I am instructed by Him to read the first verse that I see. And that is the verse that He means. Truly, this method makes me easy to know and deepen the Revelation. A right answer from verses that I got made me surprise and very grateful, for since that time, whenever I was not sure with the voice in my heart, I directly opened Quran or Bible. And that made me familiar with the content of those both holy books. The next step I was guided by God to move to other holy books, those are Veda and Dhammapada.

Thus, I don’t need to be panic and put all of my efforts to learn it from zero, for I am constantly guided by God to understand the content of the Holy Books intensely in that way. However, according to God, my method could be promoted to the public. Therefore, I stated here, that if someone is facing heavy problem and want to get God’s Direction, just ask God through His Holy Book. The Holy Books of all religions are His Words. And God has perfected His Holy Verses in every Holy Book, and they become a guidance of life for everyone.

Whatever your problem is, pray while holding your holy book of your religion, afterwards spontaneously open any page, and look at the first verse you see, and that is God’s Answer for you. The easiness to get God’s Direction through His Holy Books is His Help. For surely now there are lots of calumnies, deceptions and manipulations, those matter cause all steps could be doubted. If you are going through that experience, ask for God’s Direction through that way. Hopefully you are guided by God, as He guides me.

God said it is fine that I convey this matter to the public in order to make them all back only pleading for His Direction. Therefore, that is my secret why I am so confident to write down God’s Revelations. Certainly God has a means to bring back tawheed for all religious people. And that is one of the ways.

Ever since I know Jibril, my personality totally changes. I become humorist. My sense moves from just a flower artist to become a writer. I could even write a poem and assist my friends in Eden to compose songs. The lyric was dictated by Jibril to me and then Dunuk composed the melody. Venus and Hejaz composed the music. Arif and Elfa also learned to compose the music as much as they could, and it worked. Thus, we in Eden have the sense or not, talented or not, could be guided to be a skilled and talented for something that each of us has never thought of it. As long as you are willing to be holy!

In the prison I wrote a lot of books and poems and journals. And of course, especially God’s Revelations. Particularly in Tangerang Women’s Penitentiary, I wrote many God’s Revelations, which are now displayed on the balairung’s (hall room) walls, our gathering room whenever we conduct ceremony to pray and receive God’s Guidance.

At Pondok Bambu Detention center I didn’t teach dried flower arrangement, instead I read poems. I made them enjoying the poem whilst I also played zither as much as I could. 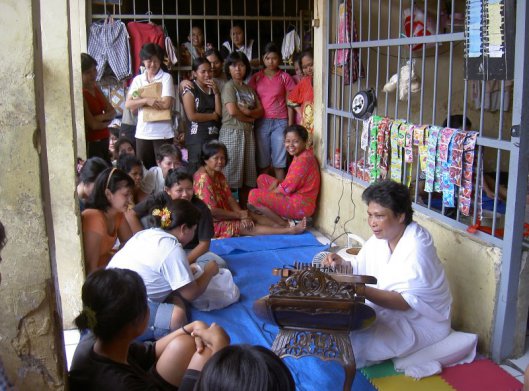 Ha..ha..ha, I wasn’t good in playing zither, but therein God made me able to play it and it was quite good as a back sound whilst I read the poem, or my fellows inmates took turn to read the poems that I made for them, or they created the poems by themselves. I even held a competition to read a poem. The prize was simple, just more special food. But they were quite happy with it.

Seeing those corruptors captured by the Corruption Eradication Commission, actually many of them were dating dangdut singers, and redirected their money laundering to these dangdut artists. And many dangdut singers fight for Freddy Budiman’s love, the drug kingpin, whereas he has been sentenced to death two times, as well as fight for Vicky Prasetyo’s love. Bah, they are so disrespected upon their own honor. Surely hope that God gives us direction to revive our nation’s dignity. It’s very stupid if women are willing to embrace a criminal.

“The Nation’s dignity could be expressed through a poem that is respected.
Whilst, the nation’s dignity and morality could fall
merely because of women have no respect of their own honor”